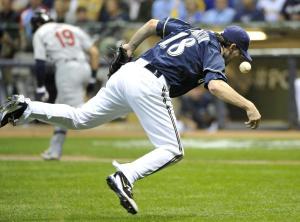 Human perception is a funny thing.

Let me posit a couple scenarios.

In the first, Shaun Marcum starts Game 2 of the NLCS at Miller Park. He does not have his best stuff, but some impressive defensive plays behind him limit the damage to two runs.  In the first, Marcum fields a Jon Jay bunt for an out before allowing a solo home run to Albert Pujols. Nyjer Morgan saves two runs in the third with his glove in center field, but Marcum allows another run in the fourth when Nick Punto singles in Yadier Molina.  Marcum is removed after that inning, and the bullpen plays scoreless baseball the rest of the way.  The Brewers win, 3-2, on a Prince Fielder home run in the eighth.

In the second, Shaun Marcum also starts Game 2 of the NLCS at Miller Park.  He does not have his best stuff, but is severely harmed by defensive lapses behind him.  He misplays a Jon Jay bunt in the first, and Albert Pujols follows up with a two-run home run.  Nyjer Morgan cannot haul in a couple of deep balls in the third, and the Cardinals again score two runs.  They score a fifth run in the fourth when Nick Punto singles in Yadier Molina, and that is all for Marcum.  The bullpen suffers an absolute meltdown after that, allowing seven more runs to score.  Prince Fielder hits a meaningless home run in the eighth, and the Brewers lose, 12-3.

The second scenario played out last night at Miller Park, but it could just as easily have been the first.  And yet today, Milwaukee is clamoring for Shaun Marcum’s head. During Marcum’s last two innings at Miller Park, I had to listen to the guy next to me repeatedly shout, “You suck, Marcum!”  Now there’s motivation for you.

Marcum, of course, doesn’t suck.  Quite the opposite, in fact.  During the regular season, Marcum had the team’s second-best starter ERA at 3.54.  He held opponents to a .232 average and allowed about 1.2 walks or hits per inning, best among the team’s starters.

There’s no doubt Marcum didn’t have his best stuff last night, but he didn’t pitch as badly as most seem to think. Sports radio this morning thought it was terribly funny to play a postgame quote from Marcum – declaring the Pujols home run pitch a good one – side by side with broadcast audio of the pitch – “right down the middle!”  Which was it?

Not a terribly good pitch, but not right down Wisconsin Avenue either.  Looks like a fastball high and away that didn’t have a whole lot of movement.  Might have been tough for any other batter, but Pujols doesn’t miss those pitches often.

And here are the rest of Marcum’s pitches in Game 2 of the NLCS.  The ones that hurt him were not right over the plate; in fact, except for that one pitch to Pujols, all the hits came on pitches either low or inside.  It looks like Marcum was simply beat by good Cardinal hitting.

And as long as we’re talking hypotheticals, let’s pretend, just for the sake of argument, that Marcum gave up the five runs but the bullpen set down five scoreless frames after that.  That would have put the final score at 5-3 on a late Prince Fielder home run.  Instead of walking away from the game shaking their heads, Brewers fans would have walked away thinking the Cardinals had eked out a narrow victory.  Would Brewers nation still be so hard on Marcum?  Doubtful.  I think our perception of Marcum was tainted more by what happened after he left the game than what happened during his four ill-fated innings.

Our perception is also tainted by recent history.  Marcum didn’t have a clean slate heading into the playoffs, allowing seven earnies in his abbreviated final regular season start against the Pirates.  And folks are quick to point out that his two mid-September starts against the Phillies and Colorado ended nearly as bad.  That all fits the narrative of Shaun Marcum as a pitcher whose first 200+ inning season has taken its toll on his arm.  They forget to mention, or just gloss over, his spectacular starts on September 4th and 20th, in which Marcum allowed one run over a combined fifteen innings with fifteen strikeouts and one walk.

So let’s cut Marcum a little slack.  Maybe we can’t figure out what’s wrong with him because there’s nothing wrong; he’s simply getting beat by good hitting.  Or maybe its something as simple as his pitch selection; as Jack Moore and Tom Haudricourt point out, he’s not throwing his bread-and-butter changeup nearly as often as he should be.

Whatever the reason for Marcum’s struggles, I can’t believe I’m hearing people seriously suggesting that Chris Narveson (regular season: 4.45 ERA, 1.4 WHIP, 3.6 BB/9) should get the start in Game 6 over Marcum. We’re talking the NLCS here.  If we’re to make our stand in Game 6, I want the pitcher with the highest upside out there.  With all due respect to Narveson, that is Shaun Marcum, and he’s shown it over and over again this season.