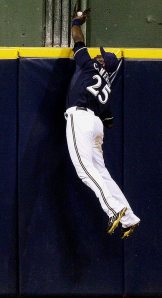 According to various Twitter sources, Mike Cameron has informed the Washington Nationals that he intends to retire.  He had signed a minor-league deal with the Nationals in December and it was widely believed that he would make the club and platoon in center field.  Cameron retires with a career line of .249/.338/.444 in 17-major league seasons.  He is one of only a handful of 250/250 players in MLB history.

Brewers fans will fondly remember Cameron.  He was signed to a one-year, $5MM contract in 2008, but missed the first 25 games due to a suspension for a banned stimulant.  Even so, he went on to hit .243/.331/.477 in 508 plate appearances with 25 HR, 70 RBI, and 17 SB to help the Brewers secure their first postseason berth since 1982.  Cameron’s signing ultimately required Ryan Braun to move from third base to left field, with Bill Hall shifting from center to third.  At the conclusion of the season, the Brewers picked up Cameron’s 2009 option for $10MM.  Cameron displayed slightly less power, but improved his plate discipline considerably.  He signed with Boston the following year.

Cameron was well-known for his sense of humor and clubhouse leadership.  He initiated the Brewers “untuck ’em” celebration after victories as an honor to his father, who would untuck his shirt after returning home from his blue-collar job when Cameron was younger.  The outfield celebration ruffled the feathers of the St. Louis Cardinals, to Brewers’ fans delight