It appears that I haven’t written a post in quite some time.  While I may be lacking in the extra time that it takes to write consistent, quality posts, I certainly have not been lacking ideas for new columns.

After an opening weekend that saw Gallardo look like a batting practice pitcher one day, followed by Greinke absolutely shutting down that same St. Louis team the next day, I decided that I wanted to write an article reminding everyone that I said Greinke would be the team’s “ace” for this season.  Then Greinke had his start in Chicago with a chance for the sweep, and he proceeded to stink up the joint (which is not an easy thing to do considering Wrigley already reeks).  Too late for that column.

Two weeks into the season, I decided that I wanted to write an article about early season overreactions, pointing out some statements and thoughts that had been running through Brewer Nation.  I was going to write about how everyone needs to calm down and not promote George Kottaras ahead of Jonathon Lucroy based on a few long balls.  I was going to write about how we need to wait a bit for Aramis Ramirez to get his feet under him before all of Milwaukee called that signing a mistake. 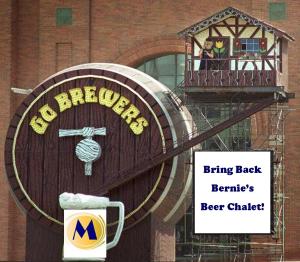 If the Brewers don’t start improving soon, Bernie might be looking for the bottom of a mug more often in 2012.

After today’s extra-innings loss to the Twins, the Brewers find themselves at 16-24.  A 16-24 record means they’ve now played 40 games, which is roughly a quarter of the way through the season.  As I looked at the standings and pondered what I could write about, I realized something:

Much like my column ideas, it’s starting to appear like it may be too late for this Milwaukee Brewers team.

Don’t get me wrong – there are still 122 games left in the season, so they have plenty of time to turn things around.  But as I watch them play (which has been downright painful this past week), I have growing concerns about certain areas of this team.

And the fact that there are 122 games left doesn’t make me say that we have time to fix those concerns.  In actuality, it makes me fear that those concerns could only grow to more frightening levels as we make our way through summer.

So let’s take a look at some of my concerns at this early but not-so-early juncture of the 2012 season, shall we?

First, allow me to give you a hypothetical situation:

When Roenicke looks to the bullpen, it often appears like there aren’t many options.

You are Ron Roenicke and the Brewers are up 3-2 going into the 8th inning.  The starter has thrown 107 pitches, so he’s done for the night.  For some reason or another, Axford and Loe are not available for this particular game.  You need to select two guys to send to the mound to get the next six outs, and your options are Rodriguez, Veras, Dillard, Parra, and Chulk.  Who do you choose?

If you’re like me, you just got that disgusting vomit taste in your mouth.  With a few exceptions, Axford has been typical Axford, giving the fans close calls but usually coming through in the end.  Loe looks like a different guy than the one who was only appearing in low-leverage situations late last year.  But everyone else?  Let’s just say that if Roenicke goes through the entire season without having a late-inning heart attack, I’ll consider that a victory.

Luckily, bullpen improvements happen every year for contenders, either with organizational call-ups – Tyler Thornburg would fill this role nicely – or through trade deadline moves, like when we acquired K-Rod last season.  The only problem is if we keep losing like we have been, we won’t be contenders when July rolls around.

Like many Milwaukee hitters, Weeks can’t seem to find any answers at the plate.

Another issue I have with this team is at the plate.  More specifically, it pains me that a good portion of our hitters have the plate approach of a Little League team.  Braun has been Braun, leading the team in most statistical categories and providing a consistent, dangerous bat, and he hasn’t been alone.  I mean, who could have seen the type of season Lucroy is producing thus far?  Oh, that’s right – I said he could do this, as did Cream City Cables founder Nate Petrashek.  But beyond Braun and Lucroy and the occasional power surge from Hart, the early portion of this season has not seen a lot of consistency at the plate for this team.  Ramirez has started to look better in recent weeks, though that’s not saying much considering how terrible he was in April.  Perhaps my biggest concern with our hitters is Rickie Weeks.  It’s one thing to start slowly, but he’s not really showing any signs of improvement.  Needless to say, my confidence in Mr. Weeks is being challenged.

Finally, I can’t help but worry about all of the injuries that have hit Milwaukee in the first six weeks of the season.  Last year, the Brewers only had to use six starters throughout the course of the entire season.  Now, we’ve lost Narveson for the season, putting more pressure on the rest of our very talented rotation.  We lost new infield regulars Gamel and Gonzalez.  Gonzalez’s defense was as advertised, so that isn’t something the team can just replace overnight.  And Gamel’s injury was heartbreaking.  The guy finally gets his everyday shot and, quite frankly, does well in that spot.  So of course he goes out for the season.  Travis Ishikawa has been a pleasant surprise, but it would have been a nice luxury to be able to bring him off the bench on most nights as a pinch-hitter or a defensive replacement.  In 2011, the Brewers had limited injuries that impacted the everyday roster.  This year, it seems like that run of good luck may have come to an end.

As I said earlier, I’m not giving up on this season.  It’s still too early to just start looking to next year (unless you’re a Cubs fan).  But if they don’t start turning things around soon, it might be too late for the 2012 Milwaukee Brewers.

One thought on “Worried Yet?”