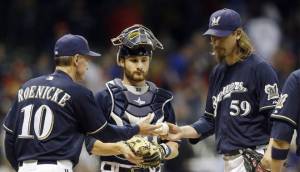 I’ll admit it; I thought John Axford should have been the 2011 NL MVP.

Well, not really.  Ryan Braun and Matt Kemp’s qualifications were beyond question, but I think Axford got the short end of the “pitchers-can’t-be-MVP’s” stick in only placing 17th.  Axford posted a 1.95 ERA last year and saved 46 for the Brewers.  He blew a whopping two saves during the regular season, and both of those came early on.  The guy was an absolute rock and, after the team acquired Francisco Rodriguez, the 8th and 9th innings were absolute locks.

This year, Axford has doubled his blown saves and more than doubled his losses from last year, and it’s only July.

The Brewers currently stand at 33-41, 8.5 games back of the division-leading Reds.  If you assume Axford had converted all of his save opportunities, the Brewers would be an even .500 at 37-37, well within striking distance.  If you take a further leap and assume that the Brewers had found a way to win each of the games for which Axford was charged with a loss – like last night, when Axford entered in a tie game and gave up the go-ahead run – the Crew would be 40-34.

The point of this is not to place all of the blame for the Brewers’ 2012 woes on Axford’s shoulders (the remainder of the bullpen and the offense share plenty of fault).  The point is to illustrate how absolutely incredible Axford’s 2011 season was, and how critical he was to winning the division.

In this sense, Axford is not unlike Peyton Manning, whom many NFL writers jokingly said would get their MVP vote in 2011 despite being injured the entire season.  With Manning in 2010, the Colts were 10-6 and easily won the AFC South.  Without him in 2011, they had the worst record in football.  The only difference is that Axford is still pitching for the team; he’s just not doing a good job.

In a way, Axford probably set the fan base up for disappointment by throwing so well last year.  Axford was never one to toss a clean 1-2-3 inning, but he found his way out of jams the vast majority of the time.  After a season and a half of sustained success, the Brewers no doubt thought they had their closer for the future, going so far as to negotiate an extension that was ultimately never signed.  Casey McGehee, anyone?

If you follow him on Twitter, it’s pretty clear he’s having a tough time mentally overcoming his struggles, first brushing them off with self-deprecating humor, then lashing out at his critics with a #TwitterToughGuy hashtag.  Maybe it’s time for Axford to take a break from closing games.  That certainly seems to be the way the tide is flowing, as Roenicke was set to bring in K-Rod for the save last night if the Brewers managed to scratch across a couple runs in the 9th.  The truth is, when you’re finding every way imaginable to lose games, what’s the harm in switching things up?

One thought on “Axford for MVP”