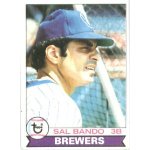 Welcome back to The Numbers Game, where each day I look at former Brewers and Pilots who have worn that day’s jersey number. Today’s number was worn by Sal Bando, Billy Spiers and Jeff Cirillo during his second tour of duty. I must be talking about the number 6. Enjoy!

No player was assigned the number 6 in the Pilots organization in 1969.

Mike Hershberger – 1970: Hershberger was .235/.306/.316 in 49 games with the Brewers in their inaugural season, recording 23 hits and 10 walks. Hershberger has the dubious distinction of having lead the American League in sacrifice flies in 1966 with 7.

Ellie Rodriguez – 1971-73: Traded to the Brewers for Carl Taylor prior to the 1971 season, Rodriguez would serve as Milwaukee’s starting catcher. Despite playing in115 games in the ’71 campaign, he would record his second lowest batting average of his career (.210). Undaunted, Rodriguez would have a banner year in ’72 in which he would bat .285 (a career best) and be selected to his second All-Star team.

After splitting time behind the plate with Darrell Porter in ’73, Rodriguez was traded to the California Angels on October 22, 1973 as part of an 9 person trade.

Mike Hegan – 1974-76: You can find information on Hegan in the 4th installment of The Numbers Game.

Sal Bando – 1977-81: A 4 time All-Star selection (’69, ’72-’74) and 3 time World Series champion (’72-’74) while with the Athletics, Bando is best known to Brewers fans not for what he did on the field, but for what he did after he retired. Bando became the Brewers General Manager on October 8th, 1991 leading the team to only 1 winning season (1992)  in his 7+ seasons with the team. Many attribute that winning season, in which Milwaukee went 92-70 to the fact that most of the players on the squad were hold overs from previous general manager, Harry Dalton.

A mixture of low payroll, poor drafting and bad free-agent decisions would create a witches brew of disappointment for the franchise as they struggled to compete. To further exacerbate the situation, Paul Molitor was allowed to become a free agent due to a lack of urgency in offering him salary arbitration. Molitor would sign with the Blue Jays and go on to be the 1993 World Series MVP.

Bando’s tenure as GM would come to an end on August 12, 1999 when he was reassigned within the Brewers organization.

No player was assigned the number 6 in the Brewers organization from 1982 through 1988.

Bill Spiers – 1989-91: Spiers would wear number 6 for his first 3 seasons with Milwaukee, then change to number 9 for the next 3 seasons. As mentioned in the 1st installment of The Numbers Game, Spiers was the object of Gary Sheffield’s rage regarding being moved from shortstop to 3rd, claiming that Spiers was given the position because he was white and Sheffield was black.

A strange incident would befall Spiers while playing for the Astros in 1999. During the bottom of the 6th inning on September 24th, 1999, Spiers was attacked on the field by a 23 year old man at Milwaukee’s County Stadium. Spiers lost a contact, received a welt under his left eye, a bloody nose and whiplash from the ordeal. For more details on the incident, click here.

No player was assigned the number 6 in the Brewers organization from 1993 through 2001.

Jorge Fabregas – 2002: The first player to wear the number 6 for Milwaukee in the National League, Fabregas was acquired from the Angels along with Pedro Liriano in exchange for Sal Fasano and Alex Ochoa on July 31st, 2002. In 30 games, Fabregas would post a disappointing .164/.178/.343 with 11 hits and 2 walks in 67 at-bats.

Keith Ginter – 2003-04: After wearing number 1 in 21 appearances in 2002, Ginter would switch to number 6 for his next two seasons in Milwaukee. Acquired from the Astros along with Wayne Franklin for Mark Loretta and cash considerations, Ginter would bat .257/.344/.448 in his 3 seasons with Milwaukee with 211 hits and 89 walks. He would be named National League Player of the Week during the final week of the 2004 regular season in which he batted .407  with three homeruns and a league leading 11 RBIs. He also led the league with 25 total bases and .926 on-base percentage.

No player was assigned the number 6 in the Brewers organization from 2007 through 2012.

So, there you have it, the good, the bad and the ugly of the number 6. Come back tomorrow for a look at Don Money,  J.J. Hardy and everyone else who has worn the number 7.

Kevin Kimmes is a regular contributor to creamcitycables.com and an applicant for the 2013 MLB Fan Cave. You can follow him on Twitter at @kevinkimmes.